Waaaay back in the day when I was in primary school we had an annual dress-up-as-what-you-want-to-be-when-you’re-older day. The dressing up bit always came down to what was available or the easiest outfit to cobble together at the last minute; I was that kid who didn’t hand over newsletters until after the event due to head-buried-in-book syndrome. There were a load of nth hour scrambles.

My projected career paths ranged from marine biologist to circus gymnast, fashion designer to chiropractor, painter to doctor, and scientist to lawyer. I ALWAYS circled around back to writer. But almost every year I went as an artist. I had a TON of paint-splattered clothing and even a specific uniform for art days because it was basically paint.

How does this all relate to a lab coat?

Well, if a lab coat pattern of this awesomeness level (it’s been thumbed up by an actual forensic scientist who wears one every day!) had existed during my childhood, things could’ve been different. I’m not suggesting I would’ve become a doctor (but maybe I would’ve… a writing sewing doctor ?) or that I wouldn’t have ended up where I am now (I’m sure I would’ve since I always wanted to be a something or other OR A WRITER* and right here is pretty fabulous), but one thing is certain; my school uniform and half my wardrobe wouldn’t have been covered in Jackson Pollock-esque flashes of colour.

The FREE lab coat sewing pattern is intended to add some extra wow to dress up collections around the world, for imagination-stimulating play, and perhaps some career daydreaming, but the magic lies in the surprise use too! This thing makes for an exceptional artist’s smock! 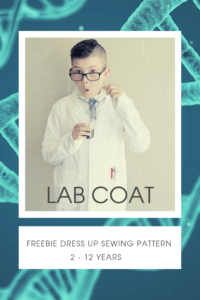 I am a massive word nerd and English is my first love; reading books and collecting dictionaries rank quite high on my To Do List (after sewing aaaaalllll the things, obviously). My favourite dinosaur is a Thesaurus, I'm a firm believer in the Oxford comma, and I think it's nice that Voldemort always waited until the end of the school year to launch an attack on Harry. Despite all his flaws, Voldemort obviously cared about education. I'm a work-from-home dog mom (Harry Potter and Dark Vega) and I basically live on social media, write a bunch of stuff, and drink copious amounts of tea. Sewing and social media in one beautiful package are my happy place!