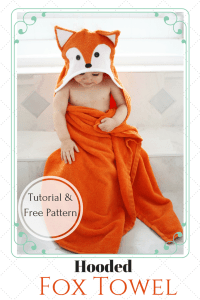 Today I’m going to show you how I made this cute fox towel. Hooded towels are pretty easy to sew up and are great for toddlers and older kids who have outgrown their hooded baby towels. 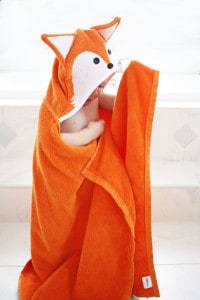 We have included a free pattern for this towel. When  you print it out, make sure that you are printing at 100% and check your 1″ square to make sure that it printed at the correct size. 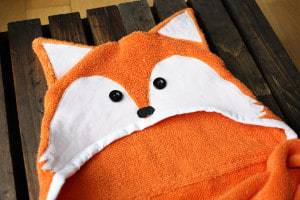 One hand towel of a matching color

A bit of black fabric for the nose

1/2″ double fold bias tape (enough to go around the front of the hood, or the entire towel if preferred)

You will also need the pattern pieces…

Download this tutorial and the pattern pieces free here 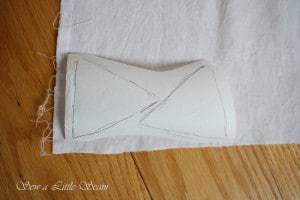 The first thing to do is print out your pattern and cut your front and back hood pieces as well as your main ear peices from the hand towel. Be careful in placing the pattern pieces so that you can fit all four of them on the one hand towel. Next cut out your muzzle, nose, and center ear pattern pieces and trace them onto the smooth side of your fusible web. Cut out your traced pieces (you don’t have to be precise at this point as shown above) and iron them onto your cotton fabric, following the directions on the package. The ear and whisker pieces will go on the white fabric and the nose will go on the black fabric. 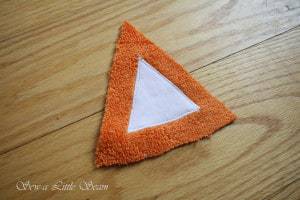 Cut out all of the pieces from your fabric. Starting with the center ear piece , remove the backing and iron it onto the right side of one of your main ear pieces. Topstitch around the ear using a zig zag stitch. I set my stitch with a width of 3 and a length under 1. This will vary by machine and preference, so you might want to test on a scrap piece. Repeat for the other ear. 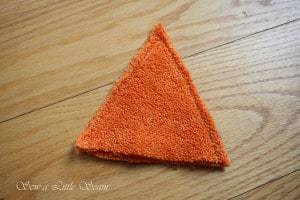 You may want to add interfacing to the back side of your ear at this point to help them stand up straight. Cut a piece of interfacing that matches your main ear piece and iron to the wrong side of the fabric, following the directions on the package. Repeat with the other ear. Now, take one of your back ear pieces and place it on the front ear piece that you just added the white to, with right sides together. (If you added interfacing, this means it will be showing when you sew). Sew around the two sides with a 1/4″ seam allowance. Leave the bottom of the ear open. 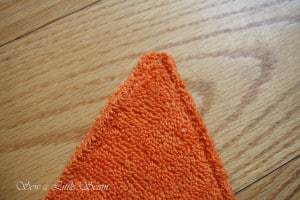 Clip the tip of your ear, being careful not to cut through your stitches. 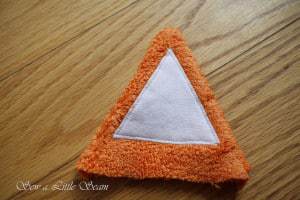 Flip right side out and poke out the tip of the ear. Repeat for the other ear. 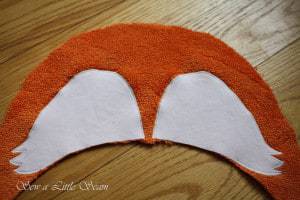 Now we will work on the whisker pieces. Remove the backing of the fusible web and iron onto the front of your towel, leaving a narrow triangle between both. Topstitch around both whiskers using the same zig zag stitch as you did for the ear. When you get to the edge of the whiskers you will have to go slowly and leave your needle in your fabric, lift up your presser foot, and pivot your fabric around the tight turns. Lower  your presser foot and continue  sewing up to the next turn. 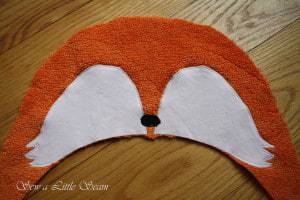 Repeat for the nose, using a black thread to topstitch. Leave your nose up 3/4″ from the bottom of your towel, as you will be adding bias tape here and you don’t want to cover your nose. 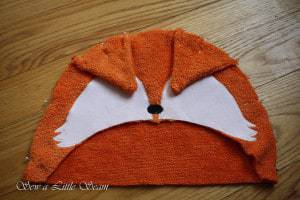 We are now going to sew the hood pieces together using a French seam. Place the front and back hood pieces together with wrong sides facing. Place the ears face down on top of the towel where you like them. Angle them toward the center of the towel, so that when they are flipped up, they end up angled out. Pin your hood and ear pieces in place and sew around the outside edge of the hood with a 3/8″ seam allowance. Trim your seam allowance down by half. 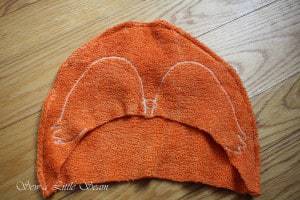 Now, turn your hood inside out and sew around the edge from this side also using a 3/8″ seam allowance. Be careful that you are sewing on the outside of the seam you already created so that it won’t show when you flip your towel right side out. Now your seam will be encased and won’t be visible from either side. 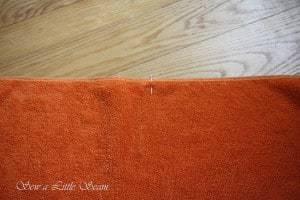 We can now attach our hood to the main towel. First, find the center of one of the long sides of your towel and mark it with a pin. 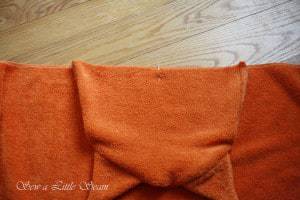 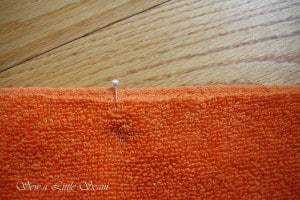 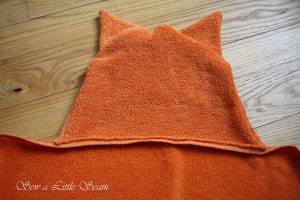 Lay your towel with the hood facing down. 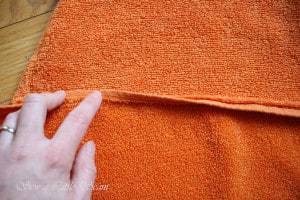 Take the edge of your towel and fold it up so that it covers the seam and creates a straight line all the way across the top of your towel. Pin in place. 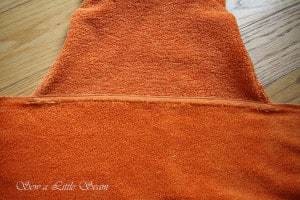 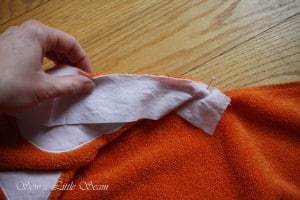 We will now add bias tape to the front of our hood. You can also choose to add it around the entire towel. I like my bias tape to match the whiskers, so I make my own. For a great tutorial on making your own, go here. Place one edge of your bias tape against the raw edge of the front hood piece, leaving about 1/2″ overlap on each end. Sew along the first fold, or 1/2″ in from the edge. 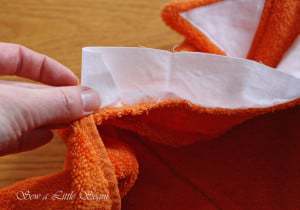 Open your bias tape out and press. Now starting at one edge, take the extra 1/2″ you left and fold it in and under the bias tape. 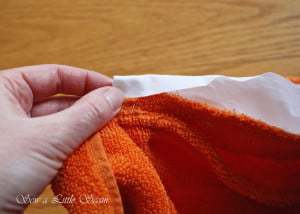 Now fold your bias tape down along the first seam, or until it touches your towel. 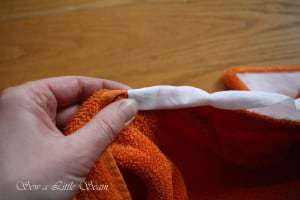 Now fold it over the raw edge and pin in place. Continue all the way down your hood, folding in the excess 1/2″ on the other side as well. Topstitch the bias tape down close to the edge, being careful to catch the front side of your bias as you go. Sometimes it’s best to pin and stitch from the front, so that you make sure the topstitching looks nice and even from the front. 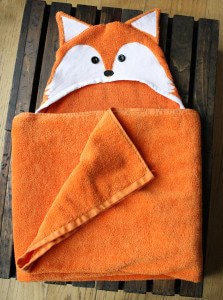 You’re fox towel is now done! Be sure to share with us on the Rebecca Page Facebook Group.

I'm Kelly--sewing enthusiast, mom, and blogger over at Sew a Little Seam. I have a tendency to start way more projects than I can finish, but getting started is half the battle, right? I also like to collect hobbies: horseback riding, scrapbooking, hockey, cooking,--you name it I want to try it. Thanks for stopping by! You can also visit me at sewalittleseam.com.

One thought on “Hooded Fox Towel Tutorial and Free Pattern”